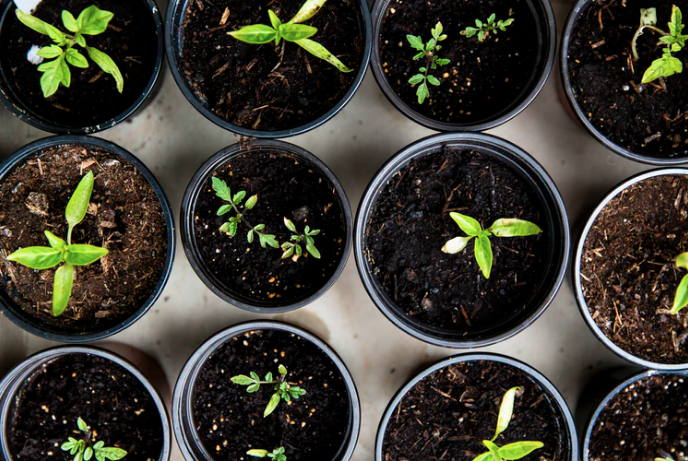 Today was my girlfriend’s birthday but I couldn’t be with her 🙁 That is, however, the nature of quarantine. Instead, her whole family did a zoom party which I was at. It was a lot of fun but also incredibly surreal.

Earlier in the day, I went grocery shopping for a family from my church who is immunocompromised and can’t leave the house. To be honest I was pretty impressed with myself given all the things I was able to find. Pro tip: the dollar tree doesn’t have limits on canned foods.

On Amazon, I got this four-headed grow lamp for about $30. I’ve been using all four heads for my lettuce (apparently it needs light to germinate) but I split it in half so that the chard can get a bit more light. Hopefully, this will help my leggy bois.

So at like one in the morning, I couldn’t sleep because I was just thinking about my plants. Which isn’t great. It’s been like five days and I’m already a crazy plant lady except I know jack shit about plants). My Chard is super leggy. It started flopping over and I didn’t know what to do.

While I was pondering at one in the morning I watered the rest of my plants. I’m bottom watering once every other day, or if necessary giving a sprinkle when the soil is dry.

So I did a lil’ bit of research and learned something interesting: beet and chard are multigerm seeds. This means that I need to (I think) thin them which I have yet to do. I also heard of lots of people having this problem with chard so if I’m still having the leggy issue I’ll take the advice from this.

My tomatoes fit perfectly in that small window so I’ll keep them there. The rest of my plants, however, are getting differing levels of light depending on which window they’re at and whether they have a grow light.

I watered my plants and thinned my chard while crying. Literally crying. It was very dumb and I was hormonal and stressed and cried at what felt like killing my children.

Today I rested. Because I got like 10% of my blood sucked out of me by the vampire clan known as the American Red Cross. Speaking of the Red Cross, if you can please donate blood. I didn’t have a great reaction (almost threw up, dizzy, etc.) but that’s uncommon and the cause important. I would do it again.

So today I worked on my most ambitious garden project yet: hugelkultur. Hugelkultur is a way of building a garden on the principles of permaculture.

To be honest, though I’m not doing it because I want to build a huge food forest. Instead, it’s a way to not have to double dig which I really don’t want to do. Especially since, even though the soil where I’m digging isn’t bad, it’s by the foundation of the house. Meaning, of course, that the soil gets all rocky and is mixed with concrete and stuff.

Instead, I dug a trench at about six inches deep which brought up some decently good soil and made sure that I didn’t come into contact with rocky soil. I put some old firewood that we didn’t use into the trench to use as the base of the mound. Then I covered that with a bit of the bad soil at the top of the garden. Next, I added branches (random ones) and then pine branches with needles which will probably ignite the ire of a few permaculturalists. I guess there’s a whole thing about conifers. But I don’t really know.

The soil, where I live also, is alkaline and I heard pine needles can help make it more acidic. So there’s that.

After that, I added some extra peat moss we had lying about and then some extra garden soil. Finally, given that it’s gonna rain for the next two or three days I topped it off with some old/dead grass. I’m hoping that, with the clippings, the soil won’t be washed away.

Once the rain has passed I’m planning on adding some kitchen scrap compost as well as a bunch of compost. To top off our concoction of things one should not eat, I’m gonna add some topsoil/garden soil. If anyone has any recommendations for a brand, let me know.